The official foundation date of the Cathedral is the 13th of September, 1333.

The cathedral is a three-nave red-brick pseudo-basilica with a unique asymmetric two-tower western facade. A clock-chime was installed on the west tower of the Cathedral. The cathedral had five bells, and the bell of 1492 was the largest in East Prussia. The decoration of the Cathedral kept works of art of all centuries of its existence. Initially, the cathedral was built as a cathedral of the Catholic Church. In the Reformation era it became Protestant.


The walls of the Cathedral were decorated with more than a hundred epitaphs located inside and outside the building. Some of them have been preserved. Since 1588 there has been a “professorial tomb” near the northern wall of the choir, the grave of I. Kant (1804) became the last in this honorable row. In 1924, in connection with the 200th anniversary of the philosopher, a portico was built over the grave, designed by the Konigsberg architect Friedrich Lars.

A special attraction of the Cathedral at that time has been the Wallenrodt Library, named for donors - Counts von Wallenrodt, located in the south tower since 1650. As a result of the World War II, the unique collection of ancient books and manuscripts was partially lost, partially scattered in different libraries. Now the hall "Walenrodt Library" is a beautiful hall of the Kant Museum.

During the Second World War, on the night of the 27-28th of August, 1944, during a raid by British aviation, the cathedral was badly damaged: everything inside burned out, the arches partially collapsed. During the assault on Koenigsberg in April 1945, the cathedral was again hit by shelling, but still was not destroyed. Surprisingly, the grave of Immanuel Kant was preserved.

In 1960, the Cathedral was recognized as a monument of republican significance, but no other measures to preserve it were taken, and under the influence of natural elements it continued to collapse. In 1981-1984, conservation work was carried out, which allowed to preserve the walls of the Cathedral. The restoration of the Cathedral began in 1994 and ended in 2005.


Archival materials were used to recreate the pre-war look.

After reconstruction, the clock tower housed the chimes - a large tower clock with bells. The appearance of the dial and hands completely replicates the historical appearance of the clock of Königsberg Cathedral. Every hour, the bells measure the time with the first tacts of Beethoven's «Ode to Joy». The four bells on the clock tower have their own names. “Alexander Nevsky” and “Peter the Great” - made with donations from Russian citizens, funds for «Kneiphof» bell (according to the historical name of the island) were raised by German citizens, former residents of Königsberg. The fourth, smallest bell in the tower complex is called "Children's" in memory of the children who died during the war.

Every year in August, on the day of the bombing of the cathedral, all the bells sound an alarm bell to remind of what happened in 1944.


Currently, the Cathedral is a concert and museum complex, consisting of large and small concert halls, the Kant Museum, tomb of Immanuel Kant and the Sculpture Park. Services in the Cathedral are not held at the moment, but there are Evangelical and Orthodox chapels available. 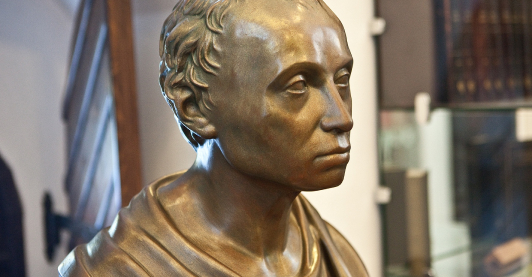 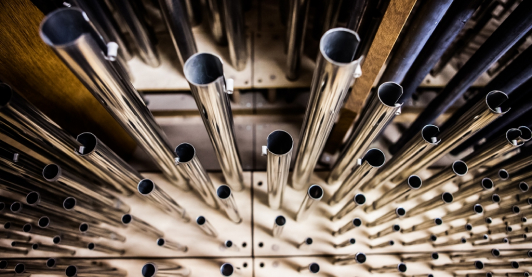 It is possible to provide custom events at the Kant Museum.